I’ve had a Kobo Arc since December 2012, but last year the USB charging point snapped off in the device and I haven’t been able to use it since.

I tried contacting Kobo and the response was that I should take it too WH Smiths, neither really wanted to help. Kobo didn’t offer anything to help. In fact their customer support was dreadful. Probably the worst customer support I have ever had to deal with, they are even worse than Microsoft and that’s saying a lot.

So after a little look on the web and realising it might be a simple fix I decided to have a go. So I took the back off the device took out the USB charge strip which seemed to be a snap-in. I noticed the female USB part was snapped off the strip so first I tried to solder it back on. But that didn’t really work. 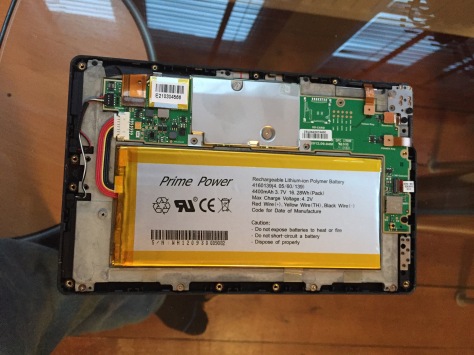 So I ordered a new strip straight off of eBay which cost around £15 but for some reason after I put in the new piece it still isn’t charging. Either the strip was no good which I got or there is another fault I don’t know about. So if anyone reads this and has a suggestion let me know.

At around 6pm I needed some food and decided to get a quick meal in McDonalds. After I ordered my meal I went and sat down.

What I noticed was a kids birthday party, one birthday girl sitting there laughing away with her friends. While six parents stood to one side waiting, watching, hardly talking to each other, some looking really pissed off like a fight was going to break out between them.

I over heard one couple say how pathetic it was to have to buy their own daughter a happy meal. And that it would of been cheaper to do a birthday party in the home!!

I was just about to leave but before I did I watched as some parents took some of the kids home and noticed that even half the kids seemed upset. After seeing the reactions of this event it’s clear to me for the child who birthday it was and her family that was just social suicide!

DC expands it’s universe to bring another show, we are given one new character in Captain Ric Hunter and a collection of cast members from Arrow and Flash.

I don’t really like shows playing around with the concept of time travel. I always feel that things go wrong and elements of the science are messed up.

This is where Legends of Tomorrow begins and probably will end for me. I watch for too much TV as it is. So I will stick to Arrow and the Flash which I have been enjoying.

As for Legends… At the beginning Hunter is told not to interfere with the timeline on Earth. But Hunter goes against the councils order. He takes his ship travels to Earth to the year of 2016, collects some heroes for a tale of revenge. Isn’t that the most classical of storylines?

A fight here and there, an assassin on the prowl, another evil villain in Vandal Savage. (Sounds like a wrestler name I once knew!)

There seems a much lighter touch to Legends than DCs previous shows. I prefer the dark personalities of the characters like you have in Arrow. That show felt grounded and more real.

As for Legends of Tomorrow, I found it cheesy, irritating, far from reality and the ending of Savage getting a Russian made nuclear warhead was so cliché.